Glee: Going Out On A "High" Note (Cuz The Writers Must Be Smoking Something) 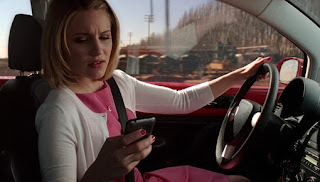 (Diana gets a disturbing Google Alert that she may not be long for the Glee world after the shocking cliffhanger ending that's coming in 3...2...1...)

It's taken me a long time to break up with Glee. I figured I'd see the show through til the current crop of seniors graduated at the end of the current season, but this week I decided to cut my losses and say goodbye during the Winter Hiatus. Why do this, you might ask, when there's only a handful of episodes left to end the season? Well, following this week's shocking cliffhanger, I feel confident the show's not going to get better and that it could most definitely get worse. If you still enjoy the show, more power to you, but I'm done.

I've always admired Glee's dedication to exploring LGBT youth themes, but there's a big difference between concept and execution. When it comes to actually writing the scripts,  does the mantra in the writing room have to be, "Defy all logic and abandon common sense?" Glee has always been uneven in its storytelling, but initially that was part of its charm along with some very winning performances by young actors I liked. Now, despite the best efforts of that winning cast, the show is just infuriating. Let's look at the last episode as an example. They are able to shoot a rather chilling sequence where one-time bully Karofsky attempts suicide by hanging himself. That was a high point... but outside of that two minutes, the rest of the episode is a total mess! I can forgive almost all the unmotivated character development and plot contrivances as simply coming with the territory on this show, but the truly unforgivable offense for me is the episode is that the Glee Club performance at Regionals is BAD. The songs were blah, the choreo was uninspired and they simply shouldn't have won. It was there worst performance as a group to date, well below the standard of their Regional performance two years ago, and it was propped up by a bunch of back up dancers from the "Troubletones" group that haven't been seen since Sectionals. The group performs three songs and almost the whole core group sits out for one of them? LAME. And kinda lazy. And don't even get me started on the whole ridiculous Finn and Rachel getting married storyline. I'm sure it's something certain teenagers contemplate or do, but not these two. They have zero reason to get married and the fact that no adult on the show can talk them out of it is absurd. I'm so glad their Guidance Counselor somehow got "tenure" from the history department last week. She's doing an ace job there!

Ugh. So - SPOILER ALERT! -this episode ends with the shocking cliffhanger that Quinn is in a car crash because she's texting from behind the wheel. It's super sneaky on the show's part, because you think the whole episode is a big PSA about teen suicide when it actually turns out to be one about texting and driving. This show LOVES to abuse Quinn, or perhaps just her portrayer Diana Agron. After all the character assassination and rehabilitation they've done with Quinn, I'm happy to believe she got killed off in that final cut-to-blank, and I don't need the show to tell me otherwise when it comes back in April. She had made peace with her teen pregnancy, gotten into Yale, gotten back on the Cheerios squad, and wasn't trying to get with any of the boys to define her existence of her future. She went out on a high note. I doubt the show would actually follow through with killing her off, and they'd only mess things up for her moving forward. So I'm taking control of what I think the story should be in my own mind, and not worrying about how the writers are gonna cram a bunch of graduating seniors into an extra year at McKinley High. Here's a brief summary of the rest of what I'll just pretends happens on Glee from here on out.

"Quinn dies in the crash and everyone is sad and the wedding doesn't happen. Rachel regains her sanity and doesn't marry Finn. Blaine and Kurt break up and date their respective former abusers Sebastian and Karofsky like the show always wanted them to do. The New Directions Nationals performance is dedicated to Quinn and they win! After graduation, Rachel, Kurt and Santana go to NYC and become big stars and never return to Lima. Finn runs his dad's repair shop. Sam and Mercedes become the new power couple at school for the following year and they win Nationals again before graduating, but after Artie dies in a school fire in an episode depicting the necessity of checking your smoke detector batteries. Mike Chang goes on to win the 12th season of So You Think You Can Dance! Tina Cohen-Chang wins the fifth season The Voice and has a solo career! Sue gives birth to a girl named Quinn! Will and Emma have a boy named Quinn! Coach Bieste and Cooter have a boy named Artie! Finn marries Sugar and they have a girl named Artie! We flashforward 15 years where this next generation of kids all go to McKinley High where Brittany S. Pears is the Principal and they form a new Glee Club, despite singing having been outlawed by our new Alien Overlords. Everyone else I didn't mention died somehow in the preceding war with the Alien Overlords. The end."

See, Glee writing staff? It's not that hard. Feel free to take from any of what I've just offered here. I won't be watching, so I won't sue. And that will turn out to be what I've missed on Glee.
Posted by SuperOTM at 5:13 AM

this is the best blog post I've ever read on any blog ever! It is EXACTLY the way I've been feeling for the last few weeks since I watched that episode. Regional's was TERRIBLE, the whole Karofski thing was TERRIBLE and the Quinn thing was HIDEOUS!

I've been bitching about the show all season and I feel I should join you in never watching the show again and pretending Quinn died and the show ended with a lovely funeral for her but I wont, I'll cave in and keep watching.

I love Quinn and I love Dianna Agron and I'll watch it as long as she's in the show but I really do think they wrapped up her story very nicely, any other show and she'd be dead but Glee wont do it. Thankfully Dianna Agron is a fantastic actress and take away the singing and she is the best actress in the cast (well, except probably Jane Lynch and maybe Emma Mayes ) - if the writers do THEIR JOB, we should have some wonderfully acted dramatic scenes with her as she comes to terms with whatever injuries she's left with after the accident. They could writer some truly Emmy worthy scenes if they don't just abandon the whole thing and decide she is fine.

timing of a day

butterfly in the sky? I'm going twice as high!